More than a decade ago, it was becoming clear that runoff from farm acreage was choking fresh water flowing south from the Canadian border to the Gulf of Mexico. Satellite images, water testing and production declines in fisheries pointed to a pending disaster if agricultural practices were not modified. At risk, the health of millions who depend on clean water, as well as industries that depend on healthy water.

Cover crops were introduced in a dozen states that border tributaries to the Mississippi, as well as along that great stretch leading into the Gulf. Last year, the Environmental Protection Agency produced a report for Congress outlining the “successes” in that gigantic project. Here’s a link to a summary.

Here’s one small result, from efforts in Indiana:

The 2014 fall transect [study] estimated 1 million acres of living plant cover such as cover crops and winter cereal grains were planted on Indiana farms. The report also shows most Indiana farmers left their tillage equipment in the shed in the fall to protect their fields with harvested crop residues. Results for residues and undisturbed soil on harvested acres during the winter months include: 77% of corn acres, 79% of small grain acres, and 82% of soybean acres.

The fall cover crop and tillage transect occurred again in 2015, and according to the data, over 1.1 million acres of cover crops were planted in 2015, which is an increase of nearly 10 percent compared to the previous year and 225 times more coverage over the past decade. The fall tillage and cover crop transect will be conducted again in late 2016. 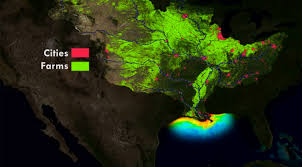 In addition to keeping pollution from entering watersheds, the practice of cover cropping also makes a healthier environment for soil to heal. That, in turn, makes corn and soybean production more profitable, even in years when drought or low commodity prices carves into profits.