You have undoubtedly read, or experienced, the following effects by stopping cultivation, adopting no-till agriculture practices and then planting cover crops, such as annual ryegrass.

In the last year, another benefit has come to light, based on the collaborative work of two men working on opposite sides of the Atlantic ocean. They claim that cover crops help to mitigate the effects of climate change.

This last point, according to Professor Kaye, “may mitigate 12 to 46 grams of carbon per square meter per year over a 100-year time horizon.” Click here to read a longer description of the article. Or, click here for the academic study itself.

While the temperatures plunge and the snow whirls, annual ryegrass top growth has been dormant for months. But under the freeze, the annual ryegrass roots continue to flourish, adding depth, girth and mass to a system that builds healthy soil in numerous ways.

The depth of rooting alone is a benefit, because it opens channels in the soil profile. Those channels, next spring and summer, will allow corn roots to seek deeper veins of nutrition and moisture. Even in a dry year, corn that goes deep will continue to thrive. And, with any normal precipitation, those root channels will help the soil absorb the rainfall rather than allowing it to run off.

Annual ryegrass has an appetite for nitrogen, too, so it becomes a storehouse of nitrogen when it grows. Then, in the spring, after it is killed with herbicide (before planting corn or beans), the nitrogen stored in the residue becomes a fertilizer for the hungry corn plants. And the massive root structure of annual ryegrass, when it is killed, that mass degrades and decomposes, increasing the carbon content and organic matter in the soil, giving worms and microbiological organisms a food source.

Because of annual ryegrass’ nature to sequester nitrogen, it’s place in the crop rotation allows you to lighten up considerably on nitrogen inputs.

For more information about annual ryegrass, why it’s beneficial and how to manage it successfully as a cover crop, you can check out this free four-page management guide. Or you can click here to view a series of YouTube videos on the subject.

The Conservation Technology Information Center (CTIC) has been a champion of cover crops for many years, and the Oregon Ryegrass Growers Commission takes a  wee bit of credit for that being the case.

Since the early 1990s, Oregon’s annual ryegrass growers have worked with Midwest farmers to prove the value of ryegrass for cover crops. Gradually, universities and nonprofits began to take notice. Cover crops were, until then, seen as a threat to crop production.

Now it appears – given proper management of cover crops – that there’s practically no end to the benefits to planting cover crops. And yet, less than 10% of farms use the practice. Sure, it took a century of tillage to prove the damage of that system; it will take a few more decades before cover crops are uniformly adopted.

Take a look at this article, that quantifies the monetary value of cover crops. You’ll be amazed, and perhaps inspired to try cover crops yourself.

And, if you want to learn more, check out this brochure from the folks that started the cover crop phenomenon – the Oregon annual ryegrass folks.

Conservation tillage, in the best sense, includes cover crops. In addition to enriching the soil, cover crops literally inhale carbon dioxide from the air and use it for plant growth. What isn’t used for growth is eventually released back into the soil.

According to the Conservation Technology Information Center (and the United Nations Food and Agriculture Organization). upwards of ONE THIRD of the carbon emitted in our world (from power plants and internal combustion engines) could be offset if farmers worldwide would all make use of conservation tillage, including cover crops.

Annual ryegrass, as a cover crop, is adept at absorbing carbon and storing it in its massive network of roots. When killed in the spring, the annual ryegrass residue (including the roots) releases its sequestered nitrogen to help fertilize the new corn and beans in the field. At the same time, the carbon in the cover crop is released into the soil, improving the ratio of organic matter and adding to the food source for soil microbiology.

Soil and Water  Conservation Districts are getting more and more involved in the promotion of cover crops. The reason is simple: over the past 20 years, it has been shown that cover crops protect the soil in ways that no-till alone cannot. 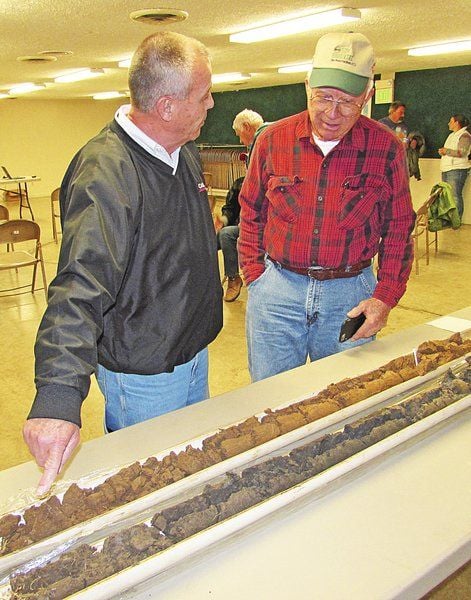 Here are some of the reasons he mentions:

Here’s a link to that article, which mentiones annual ryegrass rooting capabilities, and the popularity of cover cropping systems in the Midwest.

“Many times during a drought, plants are not as much water stressed as they are nutrient stressed,” said USDA soil microbiologist Kris Nichols.

Cover crops feed a whole web of soil organisms…much more than mere crop residue. Those organisms seek carbon and they get it from live plants like corn.

Nichols said that the microbes, in exchange for carbon, give up nutrients and water which they get from the soil.

Mycorrhizal fungi are an example Nichols uses to explain the value added that microbiology brings to crops. The little critters are threadlike, much smaller in width than plant roots, and have more access to more soil than plants.

Cover crops like annual ryegrass are conducive to production of healthy mycorrhizae population and create a symbiotic relationship helping the fungi, the soil and the plants. “Plants growing in soils rich with mycorrhizae take advantage of the fungi to help them obtain nutrients from the soil,” she added.

“They accomplish this using much less water, as well,” Nelson continued. The soil structure, rich with microorganisms, is more conducive to water retention, as she explains, “Organisms help form soil aggregates, which allows for better water absorption because there is more pore space in the soil for water as well as an exchange of gas.”

Check out this great article in the recent edition of Furrow, published by John Deere Company.

Going to No-till in the late ’70 helped reduce loss of organic matter,” said Iowa grower Steve Berger, “but adding cover crops in the past decade has really made a difference. “The organic matter present in the fence rows is between 5% and 6% but less than 4% in the fields. With cover crops, we have stabilized the losses we continued to see in our soybean rotation.”

Boosting organic matter is important, but Berger says these other things are more easily accomplished and witnessed:

Berger has used cereal rye as a cover crop pretty consistently but tried annual ryegrass about five years ago because of its deeper rooting and its ability to soak up and store nitrogen for use during the next crop season. “That’s important, especially in wet years,” he said, “because annual ryegrass will cycle nutrients and keep them from being flushed out of the field through the tiles.”