Cameron Mills, a grower from Walton, Indiana, spoke a couple months ago at the annual Oregon Seed League conference. Among his surprising messages:

These days, Mills said, consumers are driving change in ag. “They want to know where products are produced, how healthy they are, and how safe,” he said. And consumers around the world are speaking ever louder that they’ve had enough of GMO.

Mills said that after 23 years of pushing GMO, the tide is moving against it. So instead of fighting the tide, Mills has grabbed onto Non-GMO full time, in a hurry. And, he made a convincing argument that Non GMO is a darn sight less costly than going with the “Magical Seeds.” See below.

He said that with the per/acre savings, there’s a better Return on Investment with Non-GMO. So what difference does it make if the GMO seed outproduces the Non-GMO seed by a few bushels/acre? By the way, he said “magical seed” doesn’t always perform to it’s promise anyway. His farm of almost 4000 acres – corn, soybeans, triticale, wheat and beef cattle – is 100 percent Non-GMO and he’s been in continuous cover crop since 2006.

In terms of cover crop choices, Mills says he likes annual ryegrass a lot, and it has helped him reduce damage on his fields in spring when he wants to get out and start planting, even when it’s still a bit wet.

In the next blog, we’ll talk about other topics he discussed, including how to apply cover crops, how to manage and how to learn to adapt quickly with Plan B, C, and D. Farming on the fly? Not exactly, but flexibility is important…and experience helps grow confidence in being flexible.

It’s time to think about getting in gear for cover crop season in the Midwest.

If you’re starting out with cover crops for the first time, here’s a handy, comprehensive Management Guide we put together a couple years ago.

If you’re familiar with cover crops, then you’ll know that spring is the time to get rid of the remaining cover crop in preparation for corn or soybean planting.

For added tips, Here’s an article from Successful Farmer, which covers the benefits as well as some advice about types of covers to consider in the future.

It was generally thought that glyphosate was safe for use around humans and animals. Scientists generally agreed that it was not carcinogenic, largely because the molecule is not soluble in fat and thus cannot be stored.

Nonetheless, several juries have awarded tens of millions of dollars in damages to plaintiffs who claimed Roundup caused their cancer (non-Hodgkin lymphoma). They based their case on a World Health Organization (WHO) study.

Other recent studies have found indications that long term exposure to application and use of glyphosate (perhaps in combination with other agents found in Roundup, Touchdown, or other proprietary brands of herbicides) could provide a weak link to a type of leukemia, although another study countered an earlier finding that glyphosate has a weak link to lymphoma (the WHO study.)

At issue, among other things, is whether it is the glyphosate itself, or glyphosate in combination with other active  (non-toxic) chemicals that creates toxicity. A recent article in The Scientist magazine sheds considerable light on the subject, although conclusions are still scarce.  Vanessa Fitsanakis, an 8th generation farmer herself, as well as a neurotoxicologist at Northeast Ohio Medical University, has met and discussed the matter extensively with scientists who defend the safety of glyphosate. Here’s a quote from the article: “Fitsanakis says that while presenting her work publicly, scientists from Monsanto or Syngenta will occasionally show up and politely challenge her research. ‘The scientists that I have spoken to from Monsanto and Syngenta are very convinced that the glyphosate by itself is nontoxic. I agree with them on that. Where I disagree . . . is that you can have an active ingredient that is nontoxic, but that does not mean that the commercial formulation is also nontoxic.’”

She goes on to say that exposure to glyphosate-based compounds may not cause diseases including cancer or Parkinson’s. But, she added, “They may be one of many risk factors that predispose people to developing sporadic forms of Parkinson’s disease in later life. And when that person with [a] genetic risk factor encounters something in the environment, like a pesticide that inhibits mitochondria, then those things together [can start] a neurodegenerative process.”

The public pressure may eventually mean a switch to other forms of weed control. Here’s an article, from North Carolina State Extension, that lists some other products – not as inexpensive nor always as effective as Roundup – but ones that may be waiting for use if and when Roundup and other glyphosate products become more difficult or illegal to apply.

The fields may already be clear of snow. You may already be noticing that the annual ryegrass or other cover crops are starting to show life. Watch carefully and be vigilant about terminating the crop before the grass reaches the “joint” stage.

Here are a couple of timely resources to help you figure out the timing, the right chemicals, the right dosage and whether or not you need to spray again. It’s best to get it right with the first application but there is a plan B should the first spray application not do the trick.

Click here for a free management brochure about annual ryegrass.

Click here for a quick guide to successful burndown of annual ryegrass.

Click here to learn about the residual effect of herbicides on corn and beans.

Combining glyphosate with other herbicides to increase the killing effect of the application has been used for many years. See our brochure on annual ryegrass management for specifics on this.

Earlier in the year, EPA allowed 15 states the green light to using Enlist Duo, a combination of glyphosate with a form of 2,4-D. But last week, the EPA filed suit to halt the distribution and sale of Enlist Duo, saying new information provided about the product by Dow “that suggests (the) two active ingredients could result in greater toxicity to non-target plants.”

EPA plans further review while Dow seeks to find a way to get clearance for the product for the 2016 season, including suggesting it might be able to modify the formulation somewhat or stipulate use conditions for the product.

Managing annual ryegrass is not rocket science…but it is all about science. Therefore, being precise about the process of killing the cover crop is important.

In prior posts, you’ve learned about the timing, the weather, the proper mix of glyphosate, adding AMS and balancing the water hardness with citric acid if needed. Some add a surfactant and even 2,4-D for better control and to get rid of other broadleaf weeds at the same time.

By now, you may have seen already whether one full-rate application of glyphosate was enough. Inspecting the field a week after the first application is smart. Look closely. Any sign of green warrants another application.

After your corn or soybean crop emerges, you can control any annual ryegrass escapes with a labeled rate of Accent Q, Steadfast Q, or Option, but best control is obtained with these products when temperatures are above 70 degrees.

At every trade show and field day, we hear the story (thankfully, fewer times each year) about how “hard it is to kill annual ryegrass.” Invariably, when you ask a couple of specific questions, the problem becomes very clear. “In some things about agriculture, you can cut corners and not cause too many problems,” said Dan Towery. “With annual ryegrass, you’re asking for trouble if you deviate from a strict management protocol.”

So, the first question Dan asks people who have trouble with annual ryegrass management:

Ammonium sulfate is a surfactant, whose purpose is to improve retention on the leaf surface and increase movement of the herbicide from the leaf surface into the leaf. AMS also softens “hard” water, helping to nullify the impact of naturally-occurring magnesium and calcium.

WIthout AMS, the minerals in water will compromise the effectiveness of glyphosate.Adding AMS helps the translocation of glyphosate to the annual ryegrass.

Proper translocation of glyphosate into the plant tissue depends on the air temperature, the weather and what time of day you apply it. For more specific information on this particular aspect, click here to take you to the annual ryegrass website. 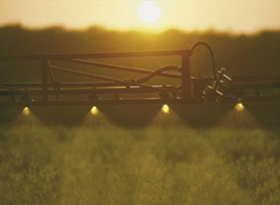 Problems can arise with any crop, and the problems multiply when management is lax. Cover crops are no exception.

Annual ryegrass has proven to be a valuable cover crop in numerous locations throughout the Midwest, Eastern Seaboard, Northern Plains states and even into southern reaches of Canadian provinces.

But, wherever you’re located, it’s important to follow basic management protocols when planting a cover crop.

1. Plant it at the right time (just before harvest, or just after) in the fall, when precipitation is expected. Doing so allows the cover crop sufficient time to establish before winter sets in and sends the cover crop into dormancy.

2. Kill the cover crop properly. Annual ryegrass is a vigorous plant and it takes sufficient ooomph to knock it out in the spring.

Try this recipe:1.5 quarts of glyphosate into 12 gallons of water. Use citric acid (or ammonium sulphate) to attain the optimum pH balance for the mix. Add Canopy (2.1 oz) and 2-4D (either a pint or a quart, depending on the cover crop).

3. The weather, the temperature and time of application are very important factors in management of cover crops. Overnight temperatures should consistently be above freezing. (It’s important that the annual ryegrass be completely out of dormant phase when the herbicide is applied.)

Moreover, daytime temperatures should be above 50 degrees, the weather dry, and spraying herbicides must be done early enough in the day to allow trans-location of the chemical into the plant. Best times to spray – between 9 a.m. and 1 p.m.

4. Scouting the acreage is part of the protocol. There are times when a second application is necessary, especially when the first application was applied when the conditions weren’t ideal.