Moving into fall and harvest season, it’s time to think about seeding your cover crop for next winter and spring.

While “interseeding” of cover crops has become more popular – where you plant annual ryegrass or other cover crop seeds into knee-high corn or beans – the majority of cover croppers still plant in the late summer or fall. Here’s a quick summary of options.

Broadcasting seed by aircraft or high-clearance field equipment is very popular for a couple of reasons. First, it’s done before harvest, where there’s less going on in the field in terms of equipment use. Secondly, it takes advantage of warmer weather to allow the cover crop seed to germinate before colder weather sets in.

The downsides to broadcast seeding are few, but here they are:

The old standard for planting cover crops was to drill it into the field at the time of corn or bean harvest. When done in optimum conditions, there’s no better way to assure a good cover crop because it gets the best seed-to-soil contact. But there are a couple of reasons why many farmers have moved to other cover crop strategies.

Click on the following links to find out more about seeding options.

The upcoming 2018 National No-Till Conference in Louisville, KY (Jan. 9 – 12) will feature some familiar faces, but with them comes new information about how to make cover crops work for you. Here are two of the classroom presentations you may wish to schedule.

Dan Towery and Hans Kok have been educating people on cover crop choices for close to 20 years. Towery helped to introduce  “interseeding” of cover crops into standing corn and beans about six years ago. This year, Iowa farmer Loran Steinlage will discuss his experience with interseeding, and the increases in crop production as a result.

Here’s a link to the whole 2018 NNTC program

Ray Weil was a guest speaker at the 2017 National No-Tillage Conference in St. Louis. His presentation focused on how cover crops benefit soil nutrient levels not only in topsoils, but in lower depths as well.

Ray is a Univ. of Maryland professor and co-author of Nature and Properties of Soil.

Here’s a link to the podcast he delivered this year.

At this point, with corn and soybeans growing to maturity, adding a cover crop this fall can be done in two basic ways: broadcast the seed or drill it.

Broadcasting cover crop seed takes place while the major cash crop is still in the field, towards the end of the season.

The challenges in broadcast application often depend on the equipment. For example, you would need to research your area for an experienced pilot with the proper adjustable seeding set up. Likewise with high clearance equipment: while do-it-yourselfers retrofit their equipment for multipurposes, others find the solution in renting equipment or contracting the application of cover crop seed.

The edge that high clearance equipment has over aerial is twofold: precision and certainty. Whereas planes can be grounded because of weather, rolling equipment has few restrictions in that area. Likewise, aerial application can sometimes create voids in coverage due to seed drift, utility infrastructure and property lines. High clearance equipment, on the other hand, can deliver seed reliably and consistently to every corner of your field.

Drilling Cover Crop Seed used to be the standard in cover crop planting but has become less popular because of one basic reason. The timing for drilling is a problem for many, given the uncertainty with weather after harvest, when drilling is done. Cover crops need passable fields and a month or more of good weather to establish. Broadcasting usually removes that barrier because is is done before harvest takes place.

For more on the topic of seeding annual ryegrass and other cover crops, visit the Annual Ryegrass Website, and specifically the various publications on growing and managing the cover crop.

Farm Progress published a management guide for growing cover crops…it’s available FREE online. Click here. (You will be asked to fill out the information they want – name, email address – before emailing it to you free.)

Here’s part of what the report says about annual ryegrass:

If you regularly plant cover crops, it’s probably a safe bet you’ve planted by now. If you’re considering planting a cover crop for the first time, looking at Farm Progress’ Management Guide is a good start. You can also find tons of detailed information about growing and managing annual ryegrass by clicking on this link, which will take you to the annual ryegrass website.

Or, click here to look at videos that discuss various aspects of managing annual ryegrass.

Planting annual ryegrass or other cover crops in the fall is tricky. Weather determines when the harvest arrives. If the ground is wet, the harvest can be delayed. If winter arrives early, there may not be enough time to plant a cover crop. That leaves the field subject to erosion, unless you’ve protected it with no-till and prior cover crops.

Farmers find aerial seeding of cover crops a better fit with their schedule. While there are issues involved with aerial seeding – how to avoid wind-drift onto neighboring farms; the cost of hiring a plane or finding a high-clearance rig with a seeder – the advantages seem to outweigh the hurdles.

By seeding annual ryegrass into standing corn or beans, you have a better chance of getting the cover crop established before winter. There are risks, of course. Seeding when rain is expected will give the annual ryegrass something to germinate into…although annual ryegrass seed can lay on top of the soil for weeks without rain without any harm. The risk is that the crop germinates and then you experience a dry spell.

Once the harvest is taken from the field, the annual ryegrass can then flourish in full sunlight. This often gives you extra weeks for the crop to establish before cooler weather sets in and stunts the top growth.

For more information about broadcast seeding and the equipment – whether a plane or a high-clearance spreader – click here.

Some years back, the Oregon Ryegrass Commission produced a series of nine videos that detail aspects of growing annual ryegrass as a cover crop.

Here are the links to the first videos in the two series: 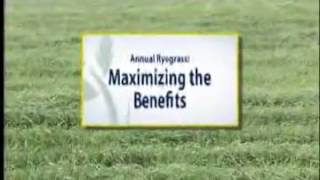 Once you view the first, the YouTube site will list the others in the series. You’ll get great basic information as well as helpful tips from cover crop experts and growers who have mastered the management aspects of this cover crop.

Learn how annual ryegrass benefits soil health, then how that translates into profits at the end of the year, with better production for corn and soybeans.

Cover cropping continues to grow in popularity and in acreage simply because it builds soil quality, improves yields and adds to profits.

That mother nature doesn’t always cooperate hasn’t diminished the appetite for producers seeking to get on the most popular new farming trend in a half century.

In a presentation a couple years ago, cover crop pioneer Mike Plumer, showed the reasons why cover crops are increasingly important as a farm management tool, particularly in the Midwest. Mono-culture crops have starved the soil of nutrients while sending immense quantities of soil into nearby waterways, eventually contributing to hypoxia in the Gulf of Mexico, one of the Earth’s largest known dead zones due to heavy pollution from farm runoff into the Mississippi river.

Beginning in 1995, the Oregon Ryegrass Commission, working with Plumer and a handfull of farmers, began to experiment with annual ryegrass in barren cornfields over winter. Since then, Oregon growers have created more winter hardy annual ryegrass grass varieties, as well as finding other cover crops, like radish and crimson clover.

Though the percentage of farm acreage in the Midwest committed to cover crops is still below 10 percent, it’s impressive that cover crops now cover millions of acres of corn and soybean acres, building soil quality, preventing erosion and improving production yields.

This past fall, seed dealers and distributors were ready. But the wet conditions and late harvest prevented some from getting the fields planted, according to Dan Towery, another cover crop consultant and colleague of Plumer.

For those times, farmers are increasingly going to new methods of planting cover crops: flown onto standing crops late in the season, for example, or broadcast with modified high-clearance sprayers equipped with seeders. Still others are trying a novel approach called interseeding, where annual ryegrass is planted in the SPRINGTIME, rather than the fall.  Click here to find out more about that program.

Last winter’s cover crop season was disappointing, said Nick Bowers, a pioneer in the cover cropping revolution and a partner in the Oregon-based KB Seed Solutions.

Even though newer varieties of annual ryegrass are hardier in tough weather, the winter of 2013/2014 was “the worst in 25 years,” he said. “When you have winter wheat and cereal rye not surviving a winter, you know it’s been severe, and that’s what we saw last year.”

Nonetheless, his sale of cover crop seed hasn’t been hit too badly. And that’s because of two things:

“Those who’ve been in the cover crop program for more than three years are sold…they’ll never quit,” Nick said, “because they’ve seen the benefits in better crop yields and improved soil conditions.”

His advice to new adopters of cover crops has always been to “be cautious, start simple.” He worries that with new government incentives offered, growers will jump in without enough information or experience. He suggests planting small plots of cover crops and check strips, so as to compare results side by side in a field.

But those farmers with whom Nick has been working now for over seven years all tout the virtues of staying with the cover crop effort. “One guy who had years of erosion problems was saying that the water leaving his fields is now cleaner than when it arrived,” he continued. And that’s only the beginning of the benefits, Nick said.